Where Will Motion Control Live in the Smart Environments of the Future?

It’s time to fully embrace a change in the way we think about technology and how we use it in our day-to-day lives. The gadgets, the APIs, and the common ground for connecting them all together in diverse and incredible ways exist right now. Leap Motion is just one part of rediscovering how we can interact with and utilize technology in this new era of potential.

Recently, I gave a presentation at Web Directions South in Sydney, where I had fun turning on a bubble machine using a Ninja Block, my Android phone, and voice recognition. I also wrote an article for SitePoint giving an overview on JavaScript beyond the web. In both cases, I discussed the exciting possibilities of the Leap Motion Controller amongst the Internet of Things (IoT) – a topic that I’d like to explore today.

If you’re a developer with a Leap Motion Controller, chances are you’ve coded up some fun little visualization or simple finger counting app on your computer that looked cool and impressed your friends. But you can do even more with it right now. Rather than controlling pixels on a screen, why not control things in the real world? Things that will physically move, buzz, light up, take a photo, affect temperature, dance, or shoot something across the room?

With this technology you can genuinely feel like Mickey Mouse in Fantasia when he moves a broom with magic sorcery for the first time. Just like Mickey trains his broom to carry buckets of water, you’ll be able to train your gadgets and gizmos to complement your day-to-day life as well. If you’re an artist or designer, you can take it one step further and create amazing new experiences – in many cases, without needing any coding experience! Let’s take a look.

What is Leap Motion’s role in the IoT ecosystem?

Ten fingers and a natural 3D plane of input makes the Leap Motion Controller a really intriguing input device for new and upcoming technologies. While the device has some great potential in desktop applications, there’s a whole world of technology out there waiting to be controlled with the same precision and 3D interactivity that buttons and swipe gestures just don’t cover. This is what I find super exciting when you look at combining Leap Motion with IoT.

With the growing ubiquity of smart environments, users will likely expect control anywhere, anytime. That’s a role fulfilled by smartphones at present, and they do a great job at it. While Leap Motion isn’t likely to match that level of omnipresence in our lives anytime soon, I don’t think that’s where it’ll shine. Tasks like “call my partner” or “turn on the TV to and change the channel to Channel 308 when I get home” are likely much better suited for voice recognition and other sorts of technology.

With this in mind, Leap Motion developers can create tools and integrate them into technology that is more “control center” oriented – when you’re sitting or standing in one particular spot and desire a certain level of control. Its role would be as a key input to send commands across the web to devices in the cloud. Chances are it’ll be paired with voice recognition and other inputs to create a whole immersive experience.

What can you do right now?

Right now, it’s possible for you to start building these control centers. There’s an unbelievable amount of potential out there to pair the Leap Motion Controller with all sorts of technology to bring about some great new possibilities.

Some of the hottest gadgets in the world of interconnected technology at the moment include Ninja Blocks, Arduinos, Raspberry Pis, fitness trackers such as the Jawbone UP and Fitbit, Phillips Hue programmable lights, and the Pebble watch. Each of those devices has an API you can connect to and potentially control by pairing it with the Leap Motion API. (Some better than others of course!) Let’s take a look at the possibilities that developers could explore using some of these technologies. At the end of the post, I’d love to hear about some of your favorite smart devices and how you’d like to interact with them in the future. 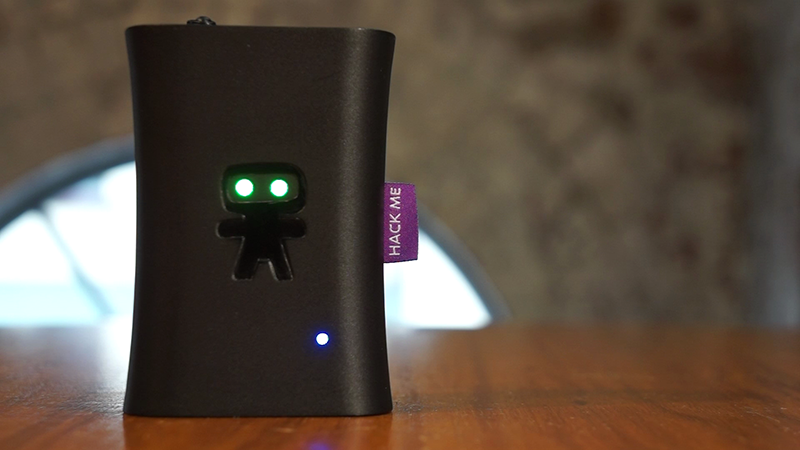 Ninja Blocks is a forthcoming integrated web and hardware platform that lets you easily create rules and action triggers for your devices. Pairing a Leap Motion with it would enable a new way of controlling electronic devices in your home or workplace. Imagine having the ability to turn on the lights by gesturing in the direction of which room you wanted to light up. Or to be able to dim all of the lights by pinching your fingers closer or further apart. Maybe you could control a home security camera from your office desk, using gestures to move it around. You could even gesture for your coffee machine to make you your favorite coffee.

You can take things to even greater heights by creating your own gadgets using Arduinos and/or Raspberry Pis. The Arduino is a single board microcontroller that lets you control electronics, while the Raspberry Pi goes a bit further to be a small, fully functional computer. They take a bit more of a learning curve, but have a huge range of possibilities.

Say you’re an artist and you’ve got a small wooden mannequin a bit of a distance away from you that you’re using as a guide for drawing your latest masterpiece. (Maybe you’re even drawing that masterpiece using the Leap Motion Controller!) You could put that mannequin onto a rotating stand, hook it up with an Arduino paired with some electronics, and then rotate it around with hand gestures. It’s something small, but in my opinion, pretty darn cool.

You could take it further and bring about Carrie levels of telekinesis. Imagine setting up your desk with various motorized tracks that have a different item on each. Your laptop stand is on one track, you’ve got a few monitors on a bunch of other tracks (or even on motorized contraptions on your wall), and you’ve got a holder for your coffee or tea on another. With Arduinos paired with a Leap Motion, you could bring each item closer or further away just by gesturing in each direction. Pull your monitor closer to you by gesturing it closer, or gesture to move everything on your desk outwards so you can write something on some spare desk space in front of you.

If you’re a JavaScript developer like me, you could even make a NodeBot that can be controlled via Leap Motion movements. (I’ve got my own wild ideas in mind for this one day!)

With fitness trackers and smart watches, there are APIs out there that’ll let you do some neat things. In some cases, controlling them with the Leap Motion device might overcomplicate things – why control a watch with gestures when you can just press a button on your wrist? – but I’m willing to bet that there are some brilliant ideas just waiting to happen in this space that nobody will see coming. The Leap Motion Controller might become the control for a gesture-enabled interface to view all of your fitness data in real time visualizations on your computer. Or maybe you can combine the Leap Motion Controller and a Pebble watch for an even more immersive input to a new piece of tech. Only time will tell.

Mobile devices have brought about revolutionary change in our lives. The convenience of the Internet and technology now accompanies us at all times. With the IoT, we can further bridge the gap between the physical limits of the device and the virtual world that lies just beyond it. Your device may no longer need to be at your fingertips at all times. You could set your phone down on your desk and still interact with it using casual hand movements.

One of the most intriguing developments in this space is on{X}, a wonderful app which lets you control your Android phone/tablet and respond to events that happen on it. Combine that with the Leap Motion Controller and you could turn down your phone volume using a gesture at your desk while in the middle of a phone conversation. Or put your phone on silent with a hand swipe when you hear it ring from your desk in the middle of your next breakthrough idea. Maybe even call that contact back afterwards by circling a finger counter-clockwise.

We’re currently living through a massive transition where almost anything can be made interactive. It’s an exciting time of experimentation for anyone with a technical and imaginative streak. New gadgets, APIs and JavaScript libraries are continually being developed to fill the gaps between our devices – in many cases, gaps that we never noticed before. Here are a few upcoming IoT technologies to follow in 2014:

Tessel: You can embed this wifi-enabled JavaScript microcontroller into hardware to give it added connectivity and a heap of new functionality – connecting it to the IoT. By embedding a Tessel and a Leap Motion Controller into a new hardware device, you could control that Internet-enabled device with gestures.

Nest: The fanciest looking, most tech-savvy thermostat around will have an API released this year. You can sign up for the developer program today. I’d love to see Leap Motion innovation here letting people casually adjust their thermostats via hand gestures.

Intel Edison: A great sign of things to come, a computer the size of an SD card was recently announced by Intel at CES 2014. The devices that’ll spring from this technology are still to be imagined but I’m sure eager Leap Motion developers will be ready to bring some innovation into whatever comes next!

While it may not be enough for you to have technological servants who can function all on their own just yet, the Internet of Things is becoming more and more promising with every new bit of technology. So much of it can be interconnected in ways which can create new opportunities to change how we work and live.

As with everything that can move and affect the real world, remember to be responsible with what you develop and test thoroughly. You don’t want to end up with that overflowing torrent of water that Mickey Mouse discovers when he awakes from his rest in Fantasia.

The possibilities grow with every person who dreams up something new in this space. What sorts of bridges would you like to build with the Leap Motion Controller and IoT? From simple platforms like Ninja Blocks to intricately powerful devices like the Raspberry Pi, the future is wide open. Let me know what you think below.

Patrick Catanzariti is an Australian web designer/developer who explores how JavaScript can control almost anything. You can follow him on Twitter @thatpatrickguy.