This week on Developer Labs, take the power of flight into your own hands with a Node.js control system for quadcopters, reach into the newly released plugin system for LeapJS, and control a holographic crystal pyramid designed with WebGL. Plus, sign up for a brand new Leap Motion hackathon in Austin.

Also this week, we’ve rolled out preliminary MinGW support, tagging physical objects, and a new integration with an open-source HTML5 game development engine. To subscribe to our developer newsletter and get updates through email, click here.

Want to show off your skills to the Austin startup community and build an Airspace app at the same time? Join your fellow software developers in a three-day marathon to create a commercially viable app featuring at least one of three themes – Discovery, Gaming, and Design.

Plugins are a developer’s best friend – often sweeping away hours of work rather than reinventing the wheel. With LeapJS’s new plugins feature, you can access a powerful and flexible extension framework that makes it easy to build and use custom plugins.

The Beginning of a Drone Revolution

We are on the cusp of a personal robotics age – can you hack it? Take to the air with Daniel Liebeskind’s Node.js drone control setup and Leap Motion interaction, and hear more about how small flying machines will change the world.

What can you make with a Leap Motion Controller, some plexiglass, and the magic of WebGL? Over the course of three weeks, a team from Stockholm’s Hyper Island created a haunting interactive illusion where people could reach out and command virtual objects sealed in glass.

You talked, we listened. After hearing lots of requests for MinGW support, we created a preliminary build for Windows app developers. It’s available for download now!

Want to use multiple Leap Motion Controllers for an art installation or UX experiment? While multi-device support is still in development, arckex discusses how you can can use virtual machines for limited applications.

To see the latest UI elements and sample code shared by the community, check out Links & Libraries. You can share your code in the dev category on our community forums.

Elsewhere in the world of drone experiments, check out Chris Matthieu’s three synchronized quadcopters – all controlled with Skynet.im through three laptops and a single Leap Motion Controller. Plus, a team of French students recently developed their own AR Drone control application. 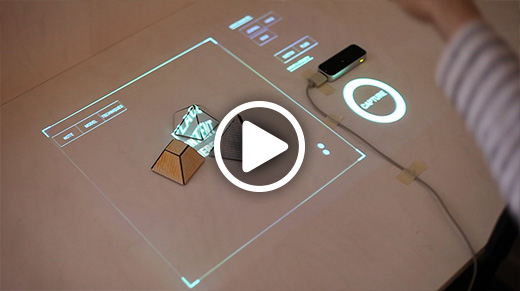 Calling all JavaScript developers – the creators of the open-source HTML5 game engine Kiwi.js are currently rolling out Leap Motion integration, and would love to hear your feedback.

How do you translate Leap Motion 3D coordinates into Three.js? Find out the answer and join the discussion on the community forums.

February 14–16, 2014
University of Pennsylvania
Watch for us at this week’s Penn Apps hackathon – where 1,200 hackers will be competing over 48 hours to hack and build apps for web and mobile platforms.